The coat of arms of Zalaegerszeg

The coat of arms of Zalaegerszeg 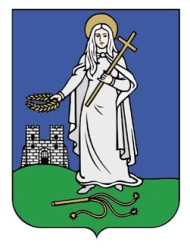 History of its formation

Zalaegerszeg have not had official coat of arms for centuries. The coat of arms with Mary Magdalena's figure, which is the patron saint of the parish church, was formed from the repeatedly altered seal's pattern.

Its various versions were used until the end of 40's.

A new one was designed and accepted in 1970, but it did not meet neither the requirements of heraldry nor the town's traditions. The Town Council started to form a traditional coat of arms in 1989 and the new leader corporation accepted the new symbol after a longer dispute in 1992, it has became the official coat of arms of Zalaegerszeg City of County Rank since then.

Mary Magdalena can be seen on the traditional shape of a shield, with lash under her feet and she holds her right laurel-wreathed hand above a stylised castle. The memories of the church's patron saint, traditional from the Middle Ages, and the remembrance of border castles of 16-17th century are mixing fortunately in the coat of arms.

The settlement had a chapel erected in honour of Mary Magdalena in 1247 already, and the motif, which was used later on as well, appeared quite clearly on the seals of the 19th century: a long dressed woman with her hair taken down. She holds out her protecting right hand above a small castle, or, she holds a crucifix in her left hand and on her shoulder. There is a lash at her feet on some seals and skull on the others.

These attributes are showing the representation of the Contrite Madonna or Mary of Magdala. The taken-down hair refers to the event of smearing the Lord with precious unction and drying it off with her hair. The unction, namely the myrrh, represents the visit at the grave at Easter Dawn, while the crucifix symbols the attendance at the feet of Christ on Good Friday. The lash is one of the medieval symbols of compunction and the skull represents the same, too.

We don't know why our forebears inaugurated the town's chapel in honour of no other than Mary Magdalena in the Middle Ages. Since her cult was not particularly widespread in this province.